Walking into his office, you instantly realize that something makes this pastor different from many of his colleagues. Sitting behind his desk surrounded by mounted heads, and the pelts of wild game, Dr. Mark Howell, pastor of Hunters Glen Baptist Church in Plano is as surprised as anybody that he has spent the past three decades in professional ministry.

Howell was not raised in a Christian home, and his career path was focused on veterinary medicine and marine biology. Said Howell, “For me, ministry was never even a thing on the radar.” But Howell was an athlete in high school and college, and it was through the Fellowship of Christian Athletes where he met the Lord and began speaking in churches and giving his testimony. Eventually he was asked to work with 7th-graders as a summer intern at First Baptist Church of Orlando. “That summer changed my life,” Howell said. “That summer, God just turned my world on end.” By the end of the summer between his sophomore and junior years of college, he had committed himself to full-time ministry.

While he finished his degree in biology, and his family were a bit shocked at the change of career, Howell says he knew his life would be devoted to ministry. “There were a little puzzled by it all,” he said. “For many, many years…even after I graduated from seminary and was pastoring, it was kind of hard for them to figure out what it was all about.” Howell’s parents ultimately came to the Lord several years later.

This summer, Howell and his wife Carmen, who serves as his personal secretary, will celebrate their silver anniversary. The couple have two daughters; Abigail, who is in her second year at Dallas Baptist University; and Rebecca, who will start her university studies at Texas A&M this fall. Howell says the family’s home life is marked with lots of laughter. “If you don’t have a sense of humor, you wouldn’t make it five minutes in our house,” he chuckled. He said that while his girls often compare him to an apple – polished and crisp – he thinks his girls would characterize him as being “goofy and fun.” Howell said he tries to teach the people in the church that we can be honest and up-front with one another. “So, I try to model that by letting people into our home a little bit, by sharing the exploits of the Howell house,” he said. From the adjoining office, Carmen adds with a smile, “I think that people would be surprised at the goofy humor you have because you are serious in the pulpit.” 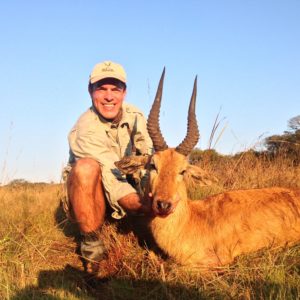 Like many who have pastored for decades, Howell has learned some hard lessons that come with leading churches. He said his greatest surprise of pastoral life is just how mean Christians can be. “You know, not growing up in a Christian home, I knew how non-Christians acted,” he said. “I had this idealistic picture of what a Christian looked like, and then I noticed really quickly…like 10 minutes into my new pastorate…that Christians are people too. They may have a new heart and a new nature, but they are constantly fighting the flesh, and they struggle with that.” Howell added he realizes it is something that every pastor has to learn, but it is the one thing that came as the greatest surprise.
The mounted animal heads on the wall give testimony that Howell loves the outdoors. “If it can be hunted or fished, I do it,” he said. As a boy growing up near Allentown, Pennsylvania, Howell learned to hunt deer and pheasant, and fish for trout and other fish native to the area. His love for hunting expanded when he moved to Texas for seminary, and eventually developed a passion for big game hunting which has taken him to South Africa, Zimbabwe, and Zambia. He has also been fishing in Patagonia, Argentina, and down in the foothills of the Andes mountains. He also recently fished and hunted dove in Cordoba, Argentina. Looking around his office he adds, “I know you can’t tell by looking at all this, but I don’t get to go as much as I would like to.”

But Howell is equally passionate about his vision for ministry as he leads Hunters Glen Baptist Church. With that vision, he says the church as developed four core values: Thinking Biblically, Living Purposefully, Embracing Diversity, and Pursuing Maturity. “It’s not revolutionary. It’s very Biblical,” he said. “You don’t have to make up some cool vision. It is right there, and we are working very hard for our church to grasp that and understand that.”

HOME ABOUT US BLOGS ENCOURAGER MAGAZINE CONTACT US
COPYRIGHT ©2018, CBA Church Network. ALL RIGHTS RESERVED. By using this site, you agree to abide by its Terms of Use, which prohibit commercial use of information from this site.